I thought more critically about what I wanted to post in this series and had this realization:

I don’t want this to fill the posts in this series with my thoughts or suggestions of what these images mean and how you should reflect on them in light of this Lent/Easter season, nor do I want it to be filled with facts or sound like a tour guide or travel sales pitch– because that is NOT the goal of this.

However, I do want to share these images and some portions of my experience with you.

Part of my dream of going on this trip was to see, firsthand, what I read about in my Bible all these years.

I fully understand this is a reality that may not be possible for everyone in the near future–or even in this lifetime– so, I want to share what I’ve seen in a way that (I hope) will allow you to see/sense what it was like to be in some of the settings that Jesus was in prior to his crucifixion and resurrection.

I decided that the best way to accomplish this would be to share select images with a brief description and the appropriate scriptures to provide added context.

Now, all of this is going to take FAITH.

Faith in these events, the belief that the artifacts identified are factual and correctly identified and that these have significance to the Christian religion.

As I tell people all the time– I don’t debate faith.  My faith is my personal experience and I respect others if they have one that differs from mine and pray that they come into a knowledge and relationship with Jesus Christ as I know Him.

That being said, here are some of my photos and reflections of a few additional sites in Israel ❤

My Travel Buddy, aka “The Husboo” on Mt. Scopus, overlooking Jerusalem. This was the first stop of our day. We often look close to exhausted in photos because our days started at 6 AM and ended around 5:30 PM each day!

Us in the Upper Room. This space was VERY crowded. At first I thought I’d be fine without taking a photo at all, but we were blessed to get to take this picture.

Matthew 26: 26-30 As they were eating, Jesus took some bread and blessed it. Then he broke it in pieces and gave it to the disciples, saying, “Take this and eat it, for this is my body.”

27 And he took a cup of wine and gave thanks to God for it. He gave it to them and said, “Each of you drink from it, 28 for this is my blood, which confirms the covenant between God and his people. It is poured out as a sacrifice to forgive the sins of many. 29 Mark my words—I will not drink wine again until the day I drink it new with you in my Father’s Kingdom.”

30 Then they sang a hymn and went out to the Mount of Olives.

Mark 13:3-7 Later, Jesus sat on the Mount of Olives across the valley from the Temple. Peter, James, John, and Andrew came to him privately and asked him,  “Tell us, when will all this happen? What sign will show us that these things are about to be fulfilled?”

Jesus replied, “Don’t let anyone mislead you,  for many will come in my name, claiming, ‘I am the Messiah.’ They will deceive many.  And you will hear of wars and threats of wars, but don’t panic. Yes, these things must take place, but the end won’t follow immediately. 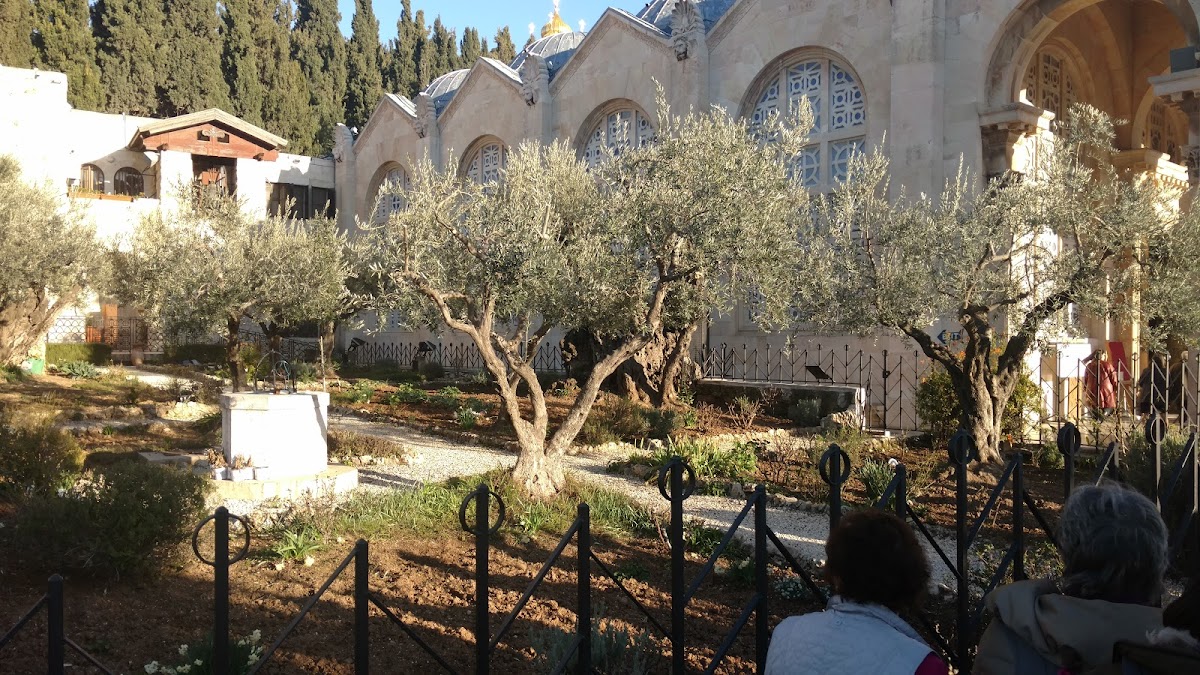 The Ancient Olive Grove in the Garden of Gethsemane 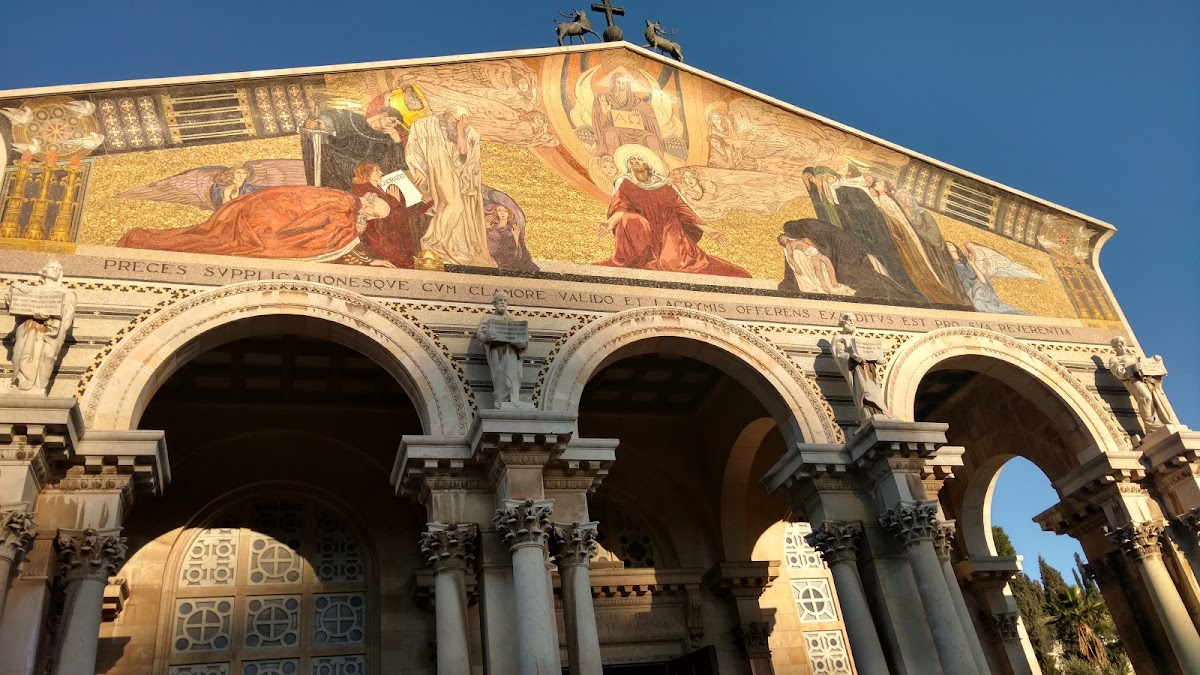 The Church of All Nations 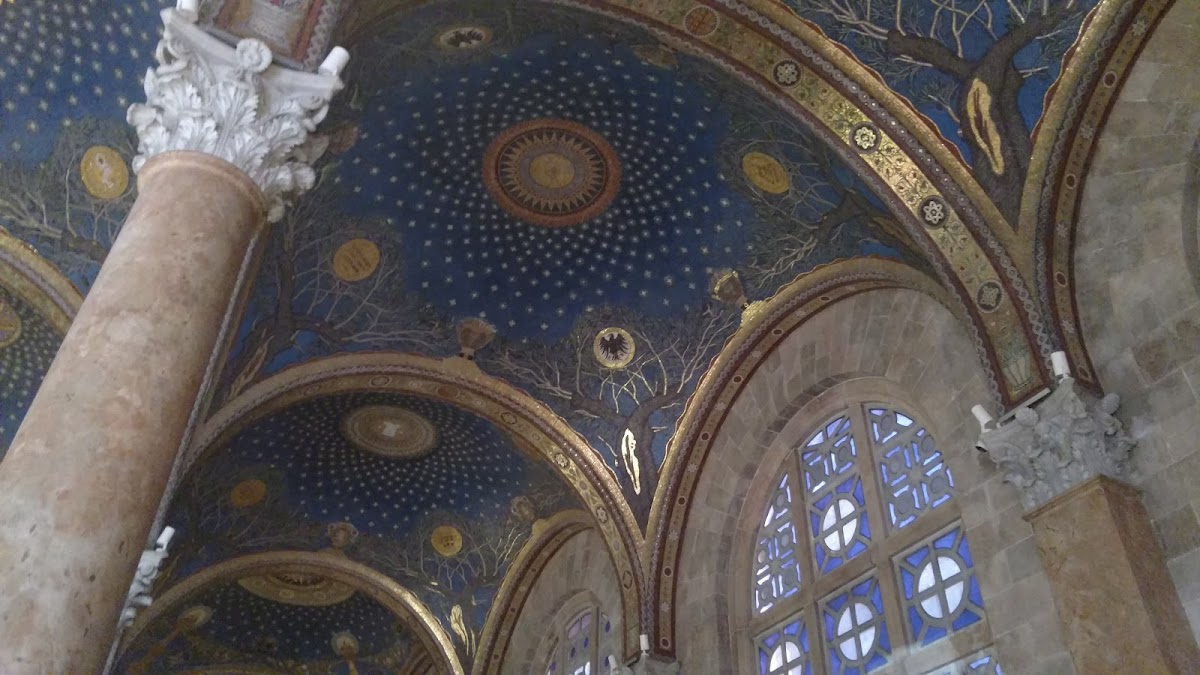 Inside of the Church of All Nations 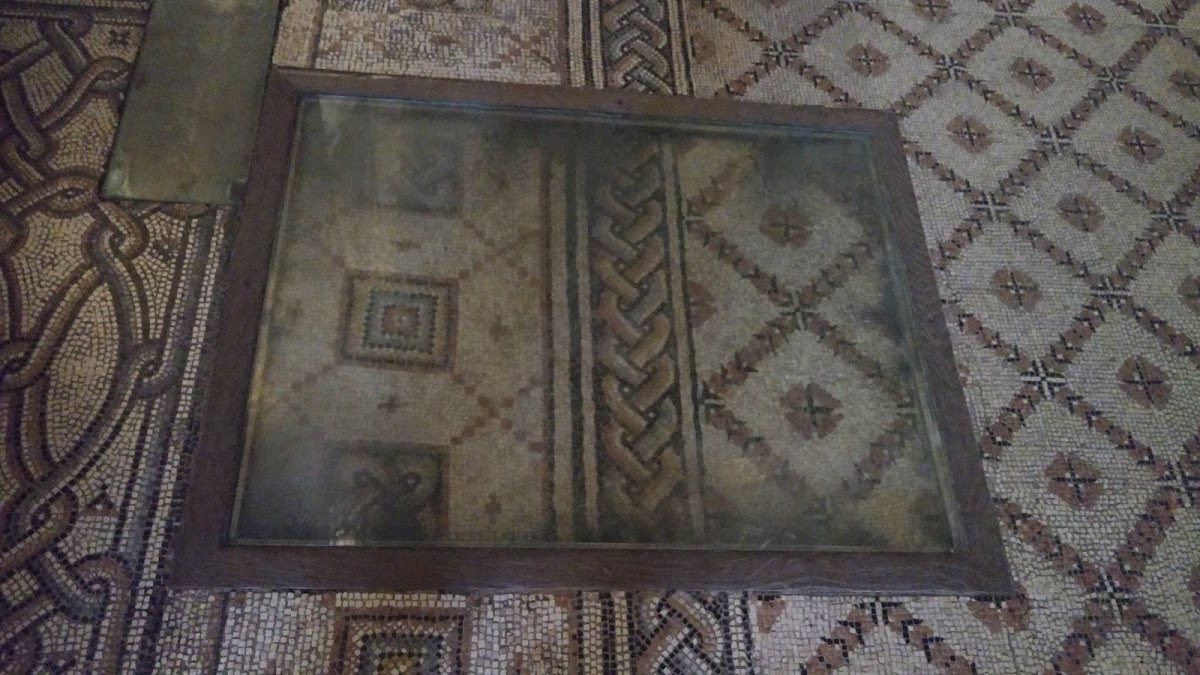 The floor in the Church of All Nations. The center glass is the original floor. The surrounding floor has been recreated. 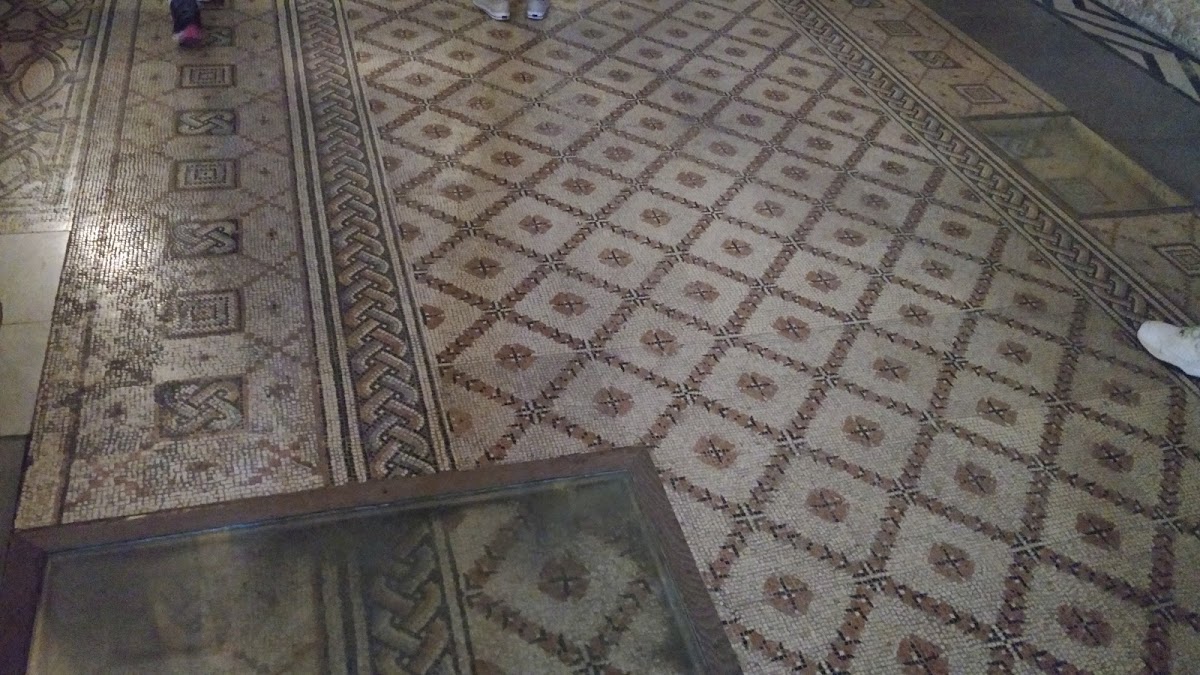 Another angle and other sections of original floor shown in the background.

Jesus Prays on the Mount of Olives

Luke 22: 39-46 Then, accompanied by the disciples, Jesus left the upstairs room and went as usual to the Mount of Olives. 40 There he told them, “Pray that you will not give in to temptation.”

41 He walked away, about a stone’s throw, and knelt down and prayed, 42 “Father, if you are willing, please take this cup of suffering away from me. Yet I want your will to be done, not mine.” 43 Then an angel from heaven appeared and strengthened him. 44 He prayed more fervently, and he was in such agony of spirit that his sweat fell to the ground like great drops of blood.

45 At last he stood up again and returned to the disciples, only to find them asleep, exhausted from grief. 46 “Why are you sleeping?” he asked them. “Get up and pray, so that you will not give in to temptation.” 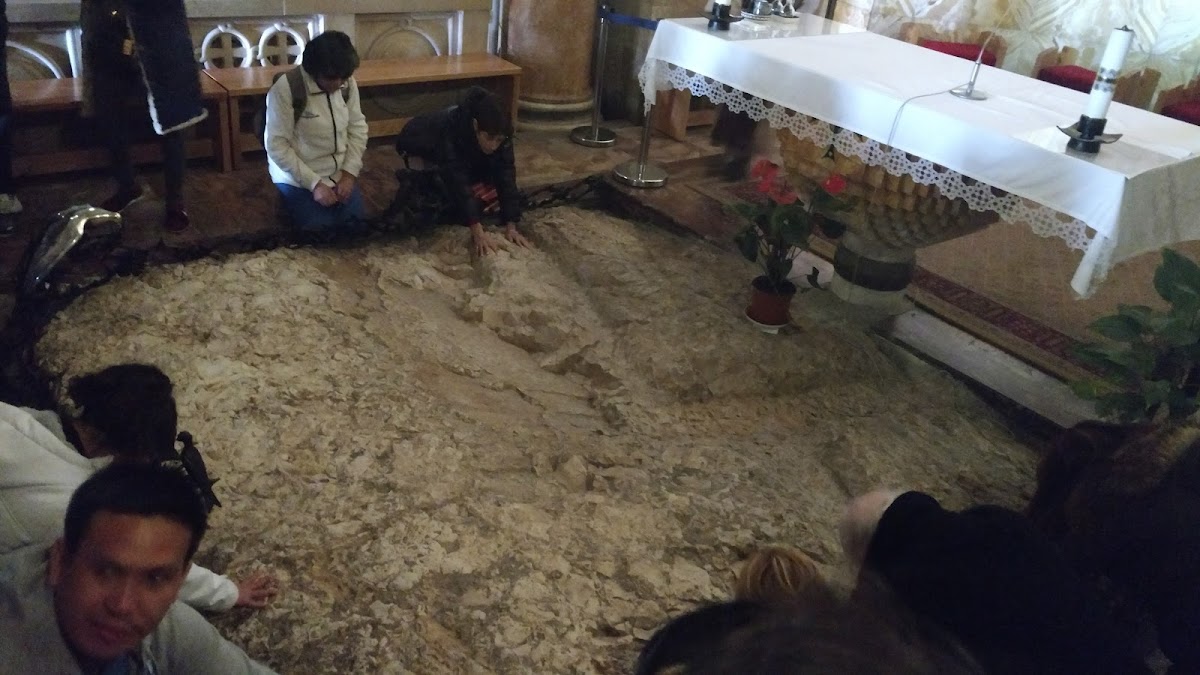 The Rock of Agony. The church was built around this rock.  It is believed that this is the rock described in Luke Chapter 22. 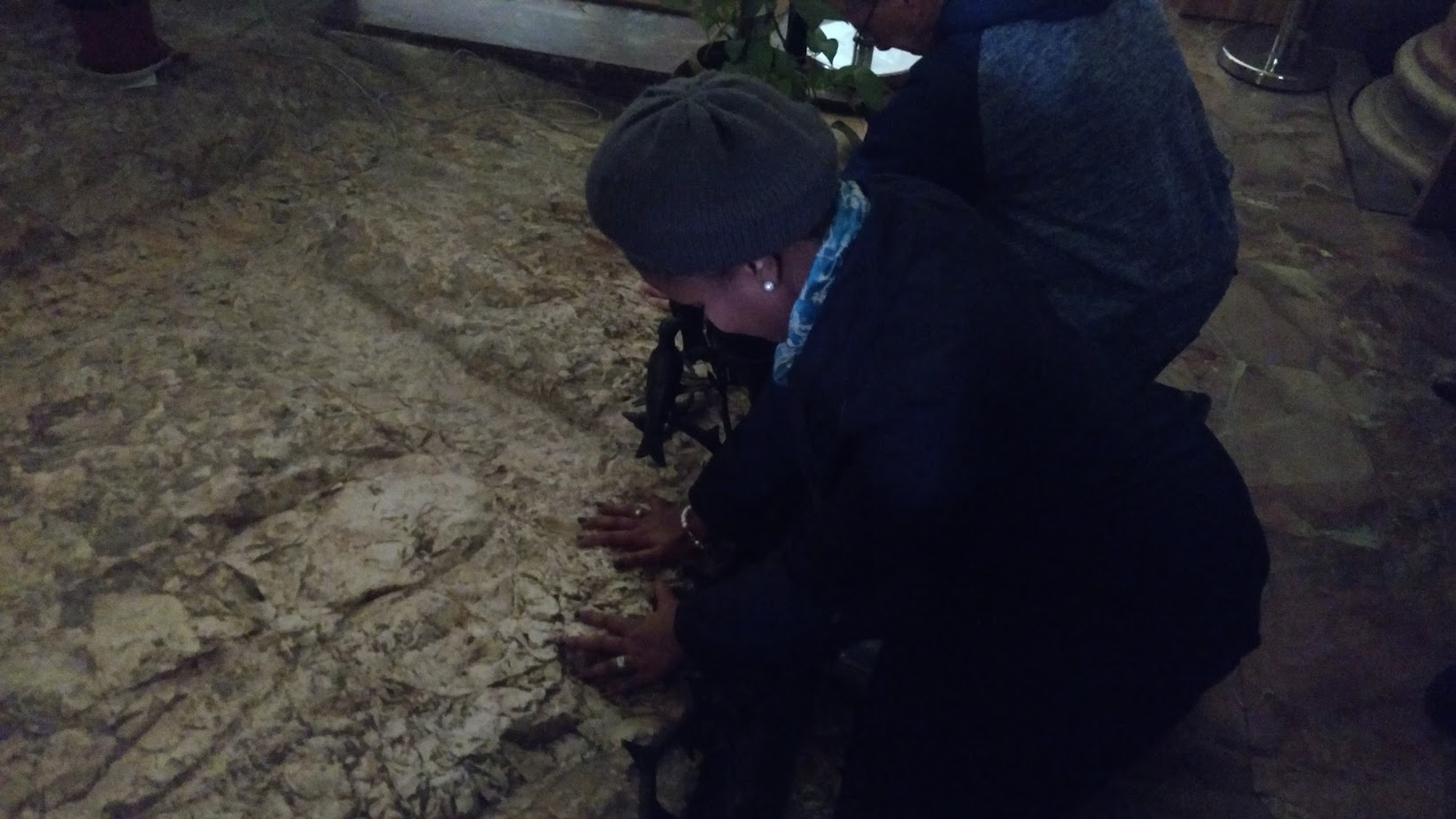 Praying on the Rock of Agony. 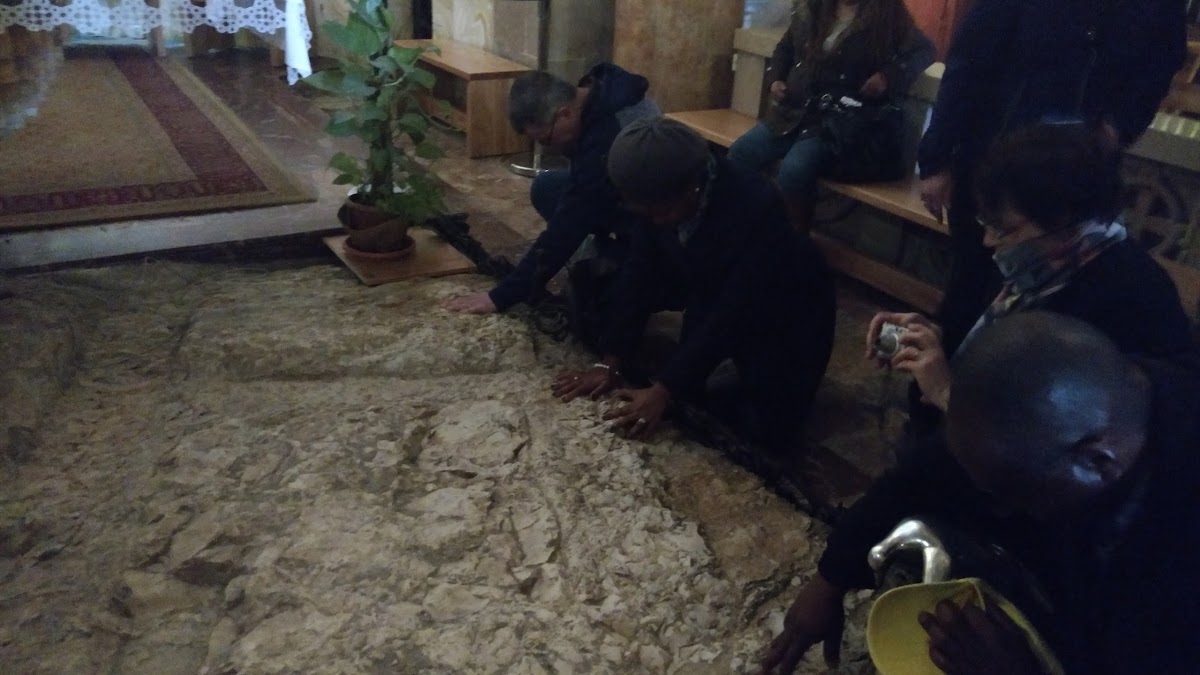 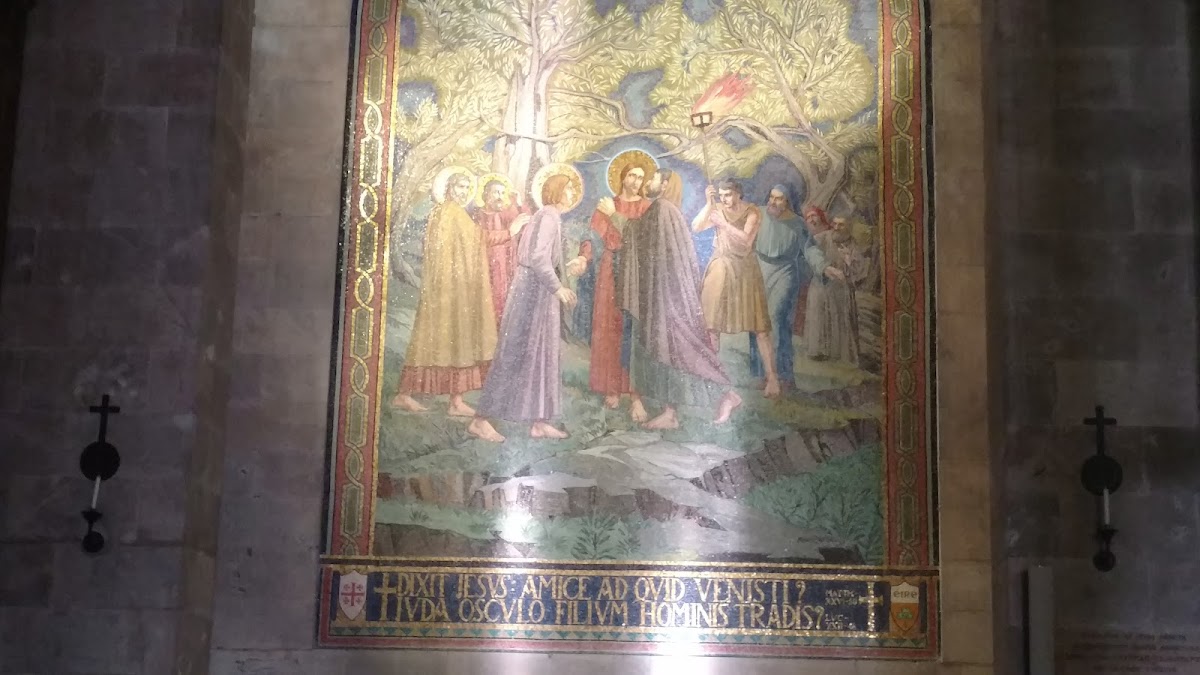 Jesus Is Betrayed and Arrested

Luke 22:47-50 And even as Jesus said this, Judas, one of the twelve disciples, arrived with a crowd of men armed with swords and clubs. They had been sent by the leading priests and elders of the people. 48 The traitor, Judas, had given them a prearranged signal: “You will know which one to arrest when I greet him with a kiss.” 49 So Judas came straight to Jesus. “Greetings, Rabbi!” he exclaimed and gave him the kiss.

50 Jesus said, “My friend, go ahead and do what you have come for.”

The Garden Tomb was one of THE MOST peaceful sites in Jerusalem.

It overlooks Golgatha (where Jesus was crucified) and the garden guides are filled with a WEALTH of knowledge.

They share items of biblical and historical significance as well as artifacts that validate this area as the adjacent site of Jesus Crucifixion and Resurrection.

Mark 16:9‭-‬11‭, ‬14‭-‬20 After Jesus rose from the dead early on Sunday morning, the first person who saw him was Mary Magdalene, the woman from whom he had cast out seven demons. She went to the disciples, who were grieving and weeping, and told them what had happened. But when she told them that Jesus was alive and she had seen him, they didn’t believe her. Still later he appeared to the eleven disciples as they were eating together. He rebuked them for their stubborn unbelief because they refused to believe those who had seen him after he had been raised from the dead. And then he told them, “Go into all the world and preach the Good News to everyone.  Anyone who believes and is baptized will be saved. But anyone who refuses to believe will be condemned.  These miraculous signs will accompany those who believe: They will cast out demons in my name, and they will speak in new languages.  They will be able to handle snakes with safety, and if they drink anything poisonous, it won’t hurt them. They will be able to place their hands on the sick, and they will be healed.” When the Lord Jesus had finished talking with them, he was taken up into heaven and sat down in the place of honor at God’s right hand. And the disciples went everywhere and preached, and the Lord worked through them, confirming what they said by many miraculous signs.

Mark 16:2‭-‬7 Very early on Sunday morning, just at sunrise, they went to the tomb. On the way they were asking each other, “Who will roll away the stone for us from the entrance to the tomb?” But as they arrived, they looked up and saw that the stone, which was very large, had already been rolled aside. When they entered the tomb, they saw a young man clothed in a white robe sitting on the right side. The women were shocked, but the angel said, “Don’t be alarmed. You are looking for Jesus of Nazareth, who was crucified. He isn’t here! He is risen from the dead! Look, this is where they laid his body. Now go and tell his disciples, including Peter, that Jesus is going ahead of you to Galilee. You will see him there, just as he told you before he died.”

I pray that I’ll have more time and the ability to share more with you all about our trip. 🙏💖

One thought on “Reflections on the Holy Land: The Upper Room, The Mount of Olives,The Garden of Gethsemane, and The Garden Tomb”